Mirrors have always been fascinating and symbolic options, both in dreams and in the real world. Just the simple act of looking at your own reflection brings a bucketload of symbolism with it and in dreams things can get even weirder if you can’t see yourself in the mirror, if you seem different in it, if you see someone else staring back at you, and so on.

So, let’s talk about the mysterious dream about mirrors we all have every once in a while and what are its 10 most likely interpretations. 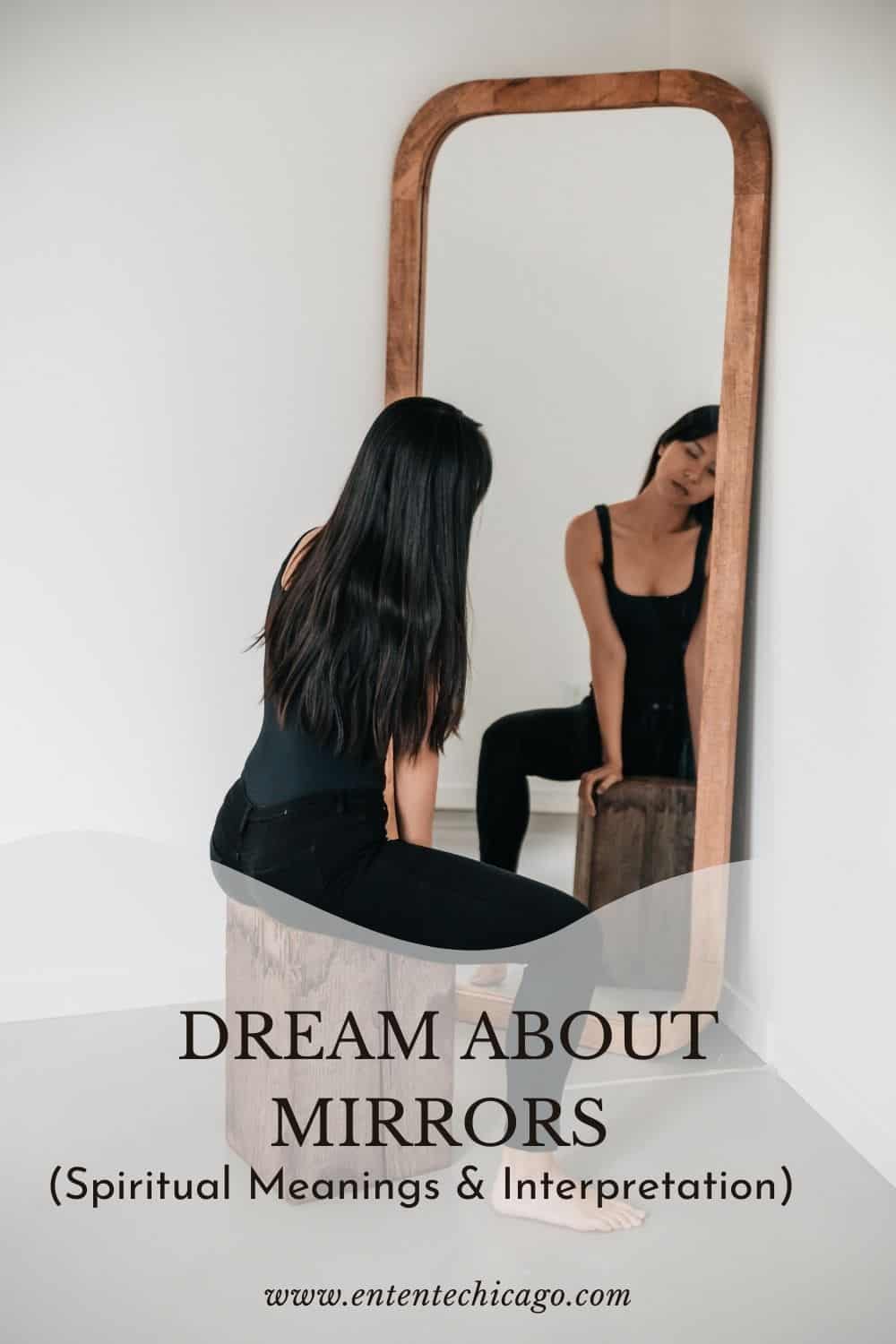 What does a dream about mirrors mean?

Any dream about you looking at yourself in a mirror will have something to do with your efforts of introspection and encountering something interesting. Exactly what that thing is will depend on your personal life, your emotional state, some recent impressions you may have picked up during your waking hours, and other details.

Regardless, it’s always good to manage to pinpoint the exact meaning of your dream as mirror dreams can have loads of highly informative insight about your personality and current state of being.

1. You are looking for self-reflection

The most obvious and also broader explanation of seeing yourself in a mirror in a dream is that you’ve been trying to do some self-reflection as of late.

With that, we don’t mean in the sense of looking at your outward appearance but rather that you’ve been trying to figure yourself out, what’s making you tick, what ails you, and so on.

Most of us go through such times of self-reflection and analysis every once in a while but especially at times of heartache, emotional distress, or personal problems. If that’s the case for you, having a dream of you quietly looking at yourself in a mirror is very much to be expected.

2. You are having an identity crisis

The harsher version of the above is that you are trying to look at yourself in a mirror in a dream in an attempt to see your self-reflection but you can’t see yourself. The confusion that’s associated with that doesn’t mean that you’re a vampire, of course, but rather that you likely have some self-identity issues you’ll need to tackle.

Another version of this dream can show you getting lost in a hall of mirrors, with different types of mirrors spread all around you, each showing a different version of you or not showing you at all. Either these dreams speak of some sort of deep-seated insecurity and major identity issues that need to be addressed as soon as possible, even with professional help if you need to.

3. You realize you’ve been heavily influenced by someone else lately

A less disturbing but often just as weird version of this dream can show you looking at a mirror and seeing someone else’s face inside it. This is actually pretty common in dreams – many other dreams have us literally changing our identity one or more times through the course of the dream.

What does something like this mean, though? Usually, it means that you see a lot of that person in yourself, especially as of late. This likely indicates that you’ve been strongly influenced by them, that you’ve shown a willingness to let them lead you in life and affect your decisions, personality, and motivations.

Whether that’s a good or a bad thing can vary on a case-by-case basis. It is good to think about it for a bit, however, and to figure out whether you really want that person to have that much influence over your life. Or, maybe you want them to have even more influence? 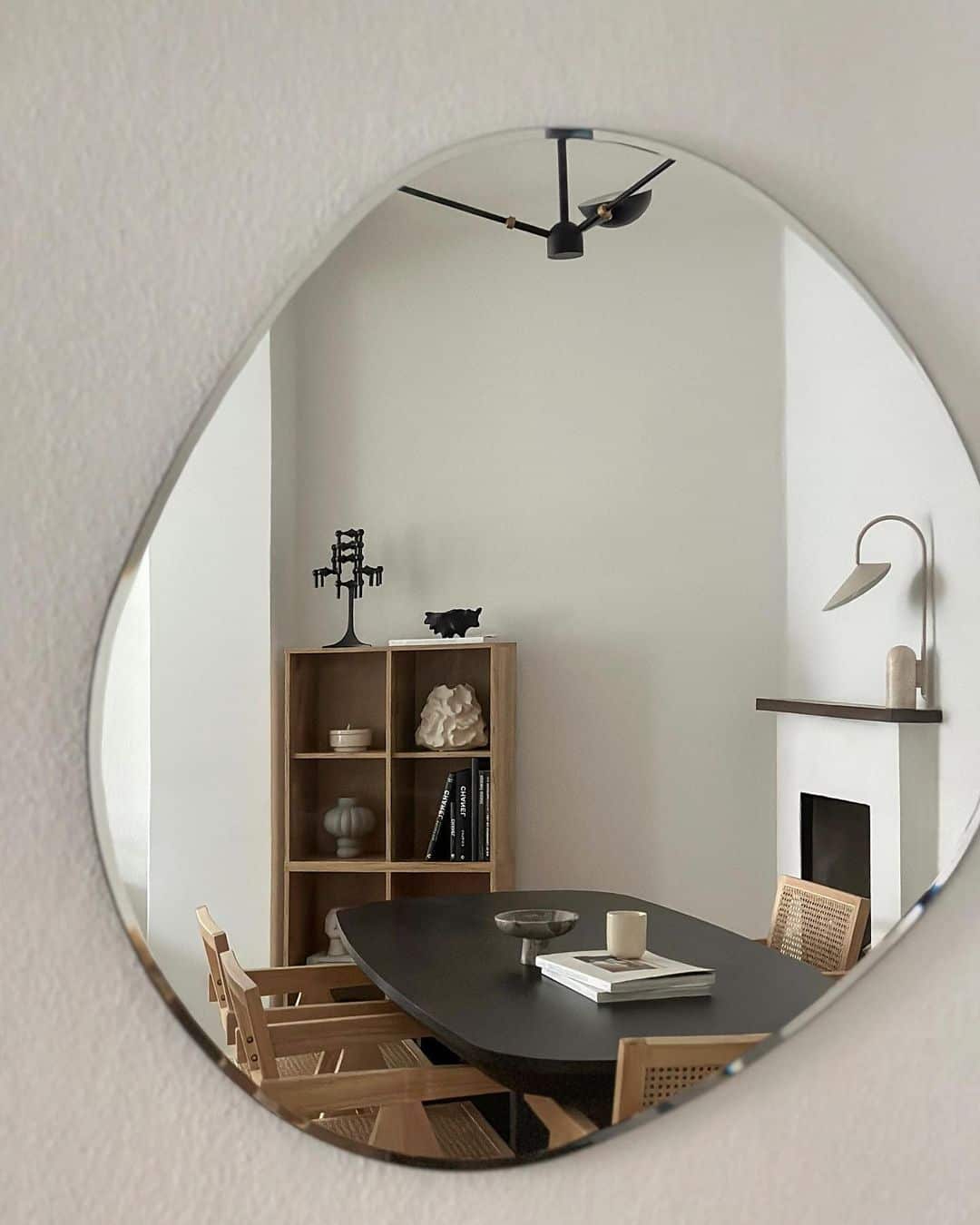 4. You’ve felt like a stranger to yourself as of late

Another interpretation of you seeing someone else’s face in the mirror – particularly if it’s a stranger’s face – is that you don’t feel like you can recognize yourself as of late. This is essentially your mind’s way of telling you that you need to change some things about yourself pronto.

Maybe you’ve developed some bad habits or a nasty vice that you need to get rid of, maybe your ego has gotten the better of you as of late, or maybe you’ve dropped an old and positive habit that you need to pick back up. Whatever the case, you’d want to change that as it’s never good if your subconscious mind can’t recognize you.

5. You’ve started to hate yourself

An even more direct explanation is that you’re not just uncertain of yourself and your identity but you’ve actively grown to hate yourself in recent times. Dreams of this type can often feel like a nightmare and can involve things such as you breaking the mirror or banging on a big mirror and failing to crack it.

A realization of this type, while painful, is meant to be met with humility and forgiveness, as well as some necessary real-life changes. Unfortunately, a lot of people react to this type of dream by going the other way – filling themselves with pride and doubling down on the very things they hate about themselves.

6. You are happy with where your life is right now

On to a more positive interpretation, sometimes a dream of you looking at yourself in a mirror is a good sign for the near future – it indicates that you’re happy with yourself and your life, you feel like you’ve been the beneficiary of lots of good luck, and you expect more good things to come your way.

Dreams of this type will always have a jovial tone, and they can even show you not just seeing your reflection in the mirror but seeing your dreams, goals, and expectations fulfilled inside the mirror.

7. You’ve been thinking a lot about yourself lately

At first glance, we may feel that to be obsessed with ourselves is to be full of arrogance and narcissism. And while that’s true for narcissists, it’s also true for many other people too – usually those that are battling a long-lasting depression and are having trouble overcoming it.

A mirror dream that hints at that can often be easy to recognize as it will have a somber tone and it will show you noticing countless defects about yourself in the mirror. This type of dream calls for immediate self-care efforts as a depression so nasty that you’ve started dreaming about yourself hating your own reflection is a very bad sign.

8. There are some emotions and issues bubbling under the surface that you’ve failed to recognize until now 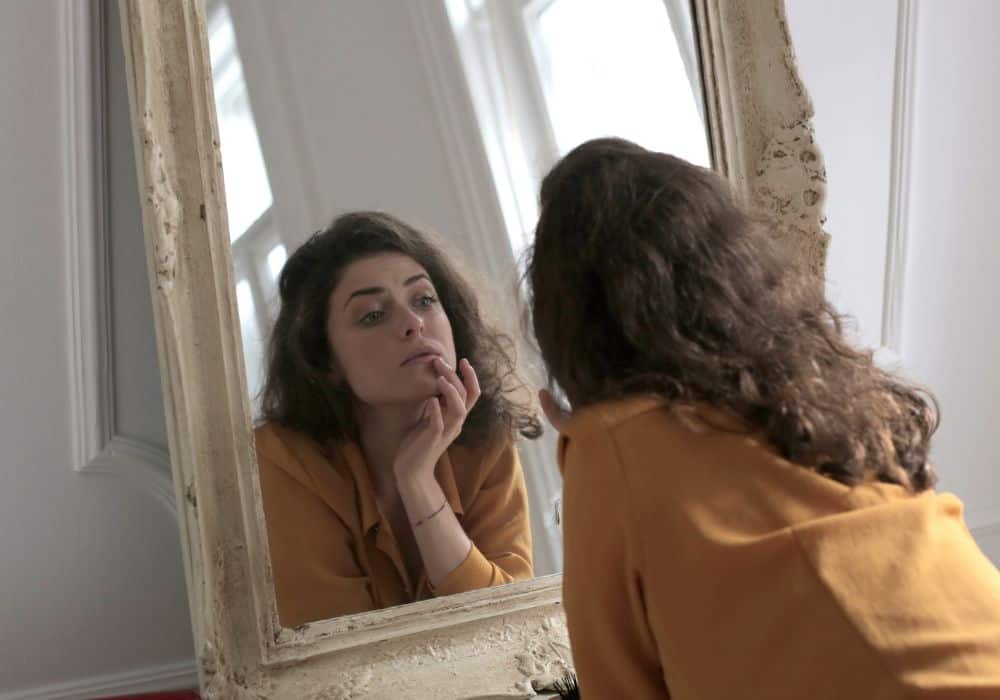 There are also those dreams of us looking at ourselves in a mirror, looking for something in particular but neither knowing what it is nor finding it. Frustrating and puzzling, this type of dream is usually the way our subconscious mind tells us that we need to find some more clarity in our life as there are lots of buried emotions we aren’t admitting to ourselves that may start getting problematic in the future.

These can include stuff such as quiet jealousy that strains your relationship, disdain for a business partner that interferes with your work, or a kind of self-hatred that prevents you from feeling good about yourself.

9. You don’t understand what’s happening to you

Then there are the types of mirror dreams that show you unable to properly use it because of the condition of the mirror. Dreams of this sort can include a foggy mirror, a broken mirror, a dirty mirror, a crooked mirror that shows you a distorted self image, or just a lost mirror that’s missing from its frame.

Such distortions and problems are typically seen to symbolize bad luck in the future but that’s just superstition. Instead, the psychological explanation is that you’ve been having problems coming to terms with or understanding something that’s happening in your life. Such lack of understanding can easily lead to bad results in the future, of course, which many folks just think is “bad luck”.

Another simple explanation is that you feel like you need affirmation from those around you but you haven’t been getting it. This could be affirmation about your beauty, your self image, your abilities, your success, or anything similar.

The type of mirror in the dream will usually make this interpretation clear as it’s rarely just a standard bathroom mirror – instead, it’s often a magical mirror like the queen’s magic mirror in the Snow White fairytale.

If that’s the case for your dream, it likely means that you either 1) need to surround yourself with people who better appreciate you or that 2) you have a somewhat unhealthy need of receiving constant validation from others.

While looking at a mirror in a dream is a common scenario for most people, as you can see, there are a lot of possible explanations for it. Fortunately, while a lot of these dreams can seem overly puzzling at first, if you remember enough details from them, they can actually become relatively easy to figure out.

Granted, the ten explanations above don’t exhaust all the possibilities – mirror dreams can be very personal and intricately woven into whatever complex issues have been topical for your life as of late. Most of the time, however, some of the issues above will either be applicable to you or will at least be a good starting point for your introspection. 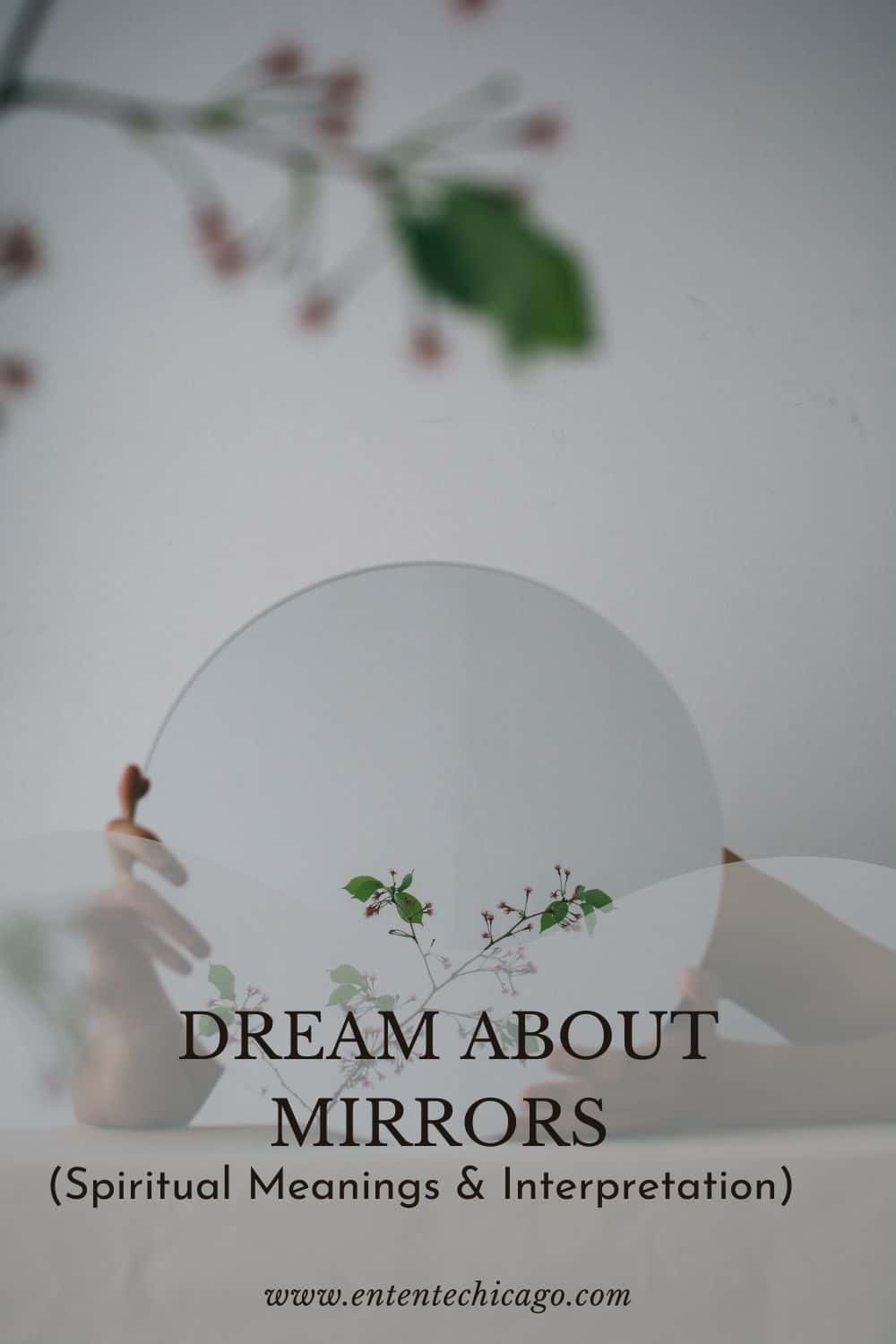