Entente Dream » What Does It Mean When A Dragonfly Lands On You? (Spiritual Meanings & Interpretation)

It should come as no surprise to anyone that the sight of a dragonfly elicits meaningful feelings of admiration and awe. Dragonflies are simply fascinating insects, and you would feel that there’s something special about them when you come into close contact with them.

There are many symbolic interpretations of dragonflies. You may find it helpful to have some background knowledge while trying to decipher the meaning of your experience with these stunning creatures. So, what does it mean when a dragonfly lands on you? What if it is a blue dragonfly? How about if it is a green or red dragonfly? Is there a more significant meaning? Let’s dig deeper! 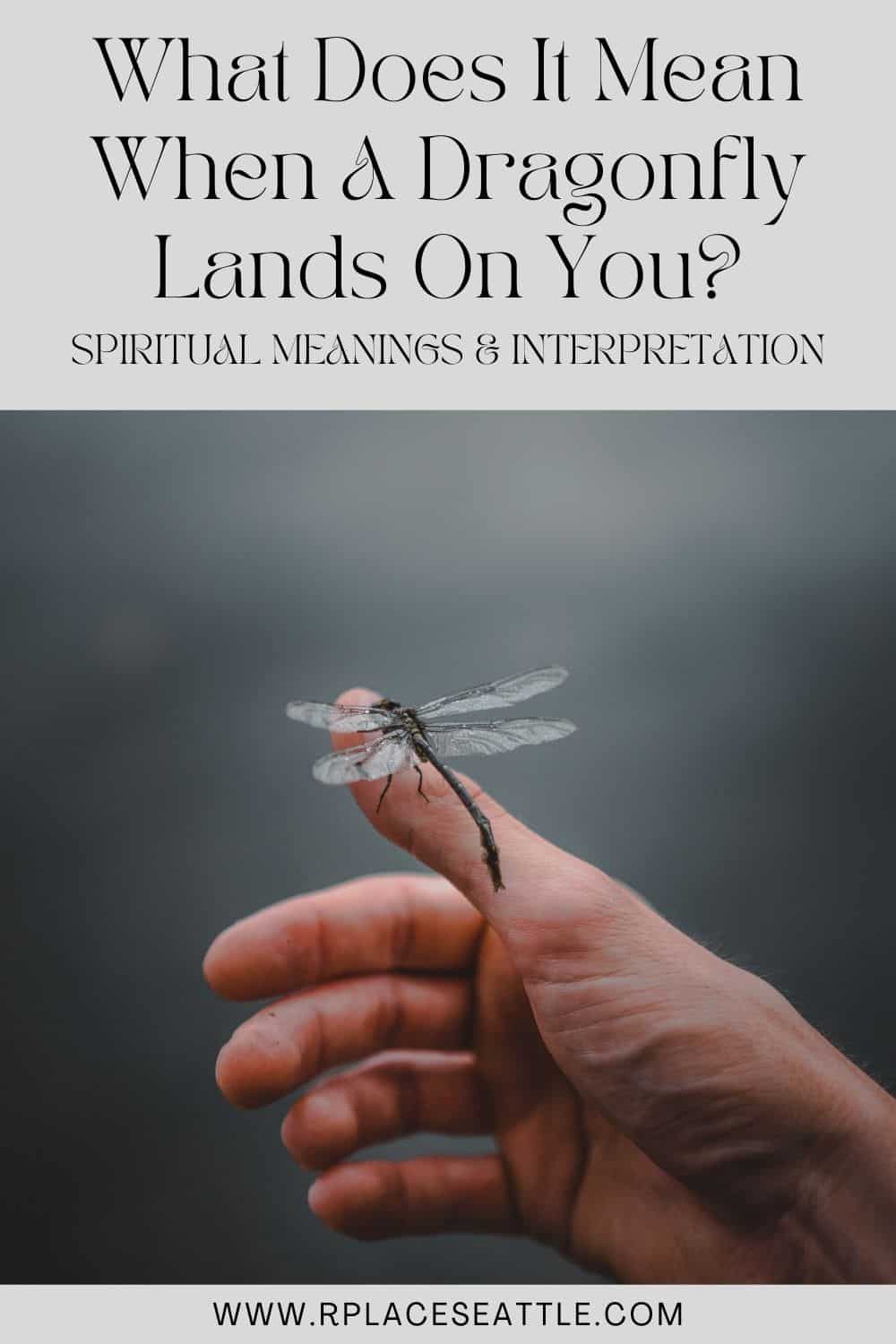 What Is A Dragonfly?

A dragonfly is an insect of the Odonata order. Dragonflies are not true flies, despite having six legs and three body segments (head, thorax, and abdomen). Flies have only two wings, while dragonflies have four, and this is the direct distinction between the two.

Understanding the Characteristics Of A Dragonfly

Carnivory is a trait shared by all stages of dragonfly development, including the larval and adult stages. They typically prey on flying insects like mosquitoes, midges, flies, bees, and butterflies. Plus, dragonflies can outrun their prey because they can quickly change and fly in many directions.

The eyesight of dragonflies is also superior to that of most other insects. They have two huge eyes, each of which is composed of thousands of individual components and each of which has six sides. These tiny eyes allow a dragonfly to notice even the slightest movement. They are able to see in color, ultraviolet light, and polarization thanks to their vast optic brain lobes and the fact that 80% of their cognitive processes are dedicated to vision.

What Do Dragonflies Symbolize?

The dragonfly’s symbolism is often used to represent metamorphosis. The transformation into its adult form begins in the water. When it reaches maturity, it flies out of the water and spends the rest of its life in the air. A dragonfly landing on you could be an indication that it’s time for a significant life shift. It could signify that you should live your life with more energy and enjoyment.

What Does It Mean When You Spot A Dragonfly?

Seeing a dragonfly is a sign from the universe that you shouldn’t disregard. It can possibly be taken as a wake-up call for you to incorporate a greater variety of experiences into your life. You need to take the next phase in your life with the same elegance and swiftness as a dragonfly as it alters its flight path.

If you frequently encounter dragonflies, it could be a sign that your life is about to undergo a transformation. It’s a sign that you need to be more adaptable in your approach.

You need to add more colors to your life! You should be more versatile and adaptable, like a dragonfly, which can alter its appearance depending on the lighting.

Dragonflies are delicate creatures, but they are able to fly calmly and with courage, even under stormy conditions. If you relate it to life, it can be taken as a reminder that we should maintain a calm and collected demeanor in response to the obstacles that we are facing right now.

The Meaning of a Dragonfly Landing on You

Generally speaking, if a dragonfly lands on you, it may be a sign that you need to reassess how you’re living your life and the choices you’ve been making, just as the dragonfly’s colors shift as it ages.

When a dragonfly lands on you, it can represent several things, including but not limited to change and transformation. You should

If a blue dragonfly descends on you, it’s a sign that you need to dig deep within yourself to gather the strength to beat the trials and hardships you’ll likely experience. The graceful, effective, and elegant nature of a dragonfly’s flight may also suggest that you can succeed in your endeavors and triumph over adversity by adopting these traits.

Note that a dragonfly only lives for a brief time after it reaches adulthood.

It is believed that the dragonfly serves as a reminder that life is short and you need to make the most of each moment while it lasts.

A blue dragonfly landing on us could mean we shouldn’t dwell on the past or worry about the future. Instead, we must stop worrying about the future and start appreciating the here and now.

If a dragonfly lands on you, it may be a sign that you need to be more flexible and open to change or a new beginning in order to deal with the challenges that life inevitably brings. If you are flexible enough to adjust to various circumstances, you will be able to make the most of every chance that comes your way. Take it as something to your advantage in the long run.

When a blue dragonfly descends on you, it’s possible that this is a sign that you’re having problems making an important decision. This time, learn to listen to your instincts rather than focus on things outside your control. Avoid worrying too much about the possible results of your choices. 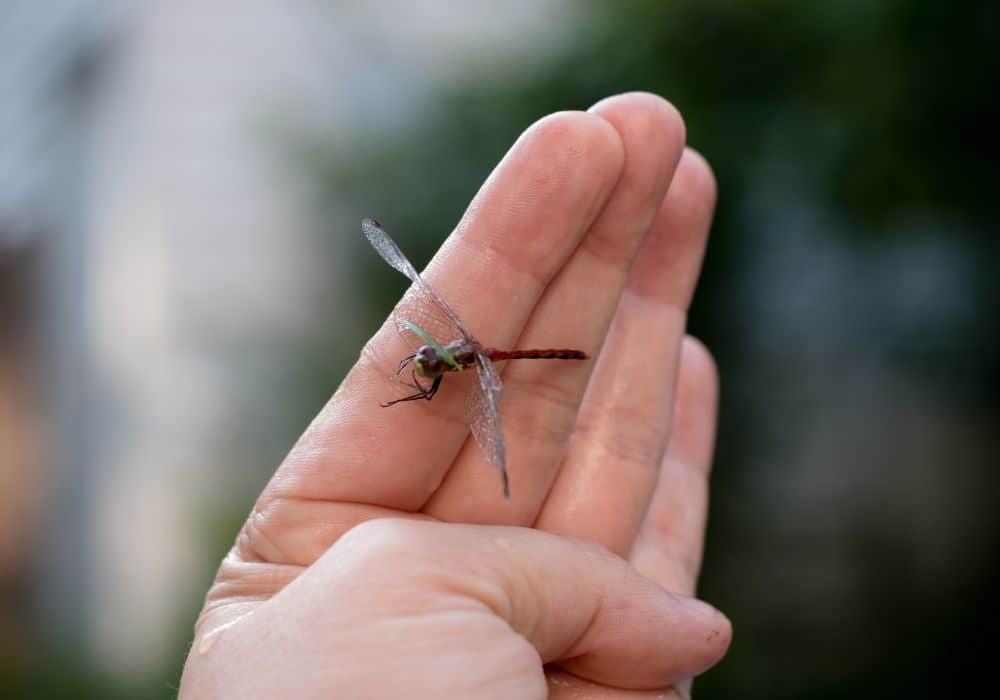 Many Native American cultures see the dragonfly as a sacred symbol. Since dragonflies have such a short life span, their metamorphosis into a new form is often a symbol of rebirth and renewal.

The Navajo view the dragonfly as a symbol of water. The Hopi Pueblo tribes see it as a symbol of healing and transformation. However, the Zuni believe that if they see a dragonfly, it is a sign of a prosperous harvest.

Dragonflies have powerful symbolic meanings among the Plains tribe; for example, the Cherokee believe that spotting a dragonfly before a fight is a harbinger of success.

But for some, the associations with dragonflies aren’t as pleasant.

For instance, some Native American tribes hold the belief that dragonflies escort snakes and treat their wounds if they get injured. In order to get kids to tell the truth, other tribes will also tell them tales about how dragonflies sew up liars’ lips.

Traditional Chinese culture holds that dragonflies are omens of impending good luck or success – especially if it is a green dragonfly! On the other hand, they are also associated with love and romance.

Dragonflies in Swedish folklore are associated with the search for lost souls that have not been baptized. If such a soul were ever discovered, it would perish instantly.

Although the Celts associated dragonflies with fairies, certain European civilizations associated them with dark magic and evil. This is likely because dragonflies resemble fairies, especially their wings, and their bodies appear to change color when exposed to light.

Dragonflies are perceived as a symbol of good fortune. Hence, the dragonfly has earned the nickname “luck-dragon” in various regions of Ireland. Seeing a dragonfly may be taken as a good omen by those who believe in Saint Patrick’s Day.

Dragonfly As A Spirit Animal

Dragonflies are considered to convey the spiritual energy of the number four since they possess four wings. That’s why dragonflies are depicted as a symbol of growth, harmony, maturity, and wisdom. In life, these traits are developed if one spends their life to the fullest. Therefore, if a dragonfly lands on you, it signifies that you will live in prosperity.

If a dragonfly lands on you, it may be a sign that you need to devote more time to developing your spirituality.

Moments like these can arouse a strong sense of spirituality, which you should interpret as a call to invest more time in your spiritual growth, especially if you’ve been putting it off.

What does it mean if you see a dead dragonfly?

Seeing a dead dragonfly is a prediction of ill luck. This could be a symbol of unwanted guests or folks you just don’t get along with. It could also mean that a chapter in your life is coming to a close, whether it be a relationship, a profession, or a specific time period.

Dragonflies are messengers of good news and other different things. The next time you see one, just let it be and appreciate this moment of encounter. This moment is a strong message of transformation, adaptability, and self-discovery. Don’t just get a broom or a mop to get rid of it!

Examine your emotions, ponder about your struggles or unanswered questions, and use cues like the dragonfly’s color as a guide to help you decipher the message. Trusting your intuition will unveil the genuine truth.