Entente Dream » What Does It Mean When Birds Fly In A Circle? (Spiritual Meanings & Interpretation)

Birds fly in all types of curious patterns and it’s always a great joy to observe them in nature. One fly pattern, in particular, has puzzled people for millennia, however –flying in a circle.

Why do birds do it and what does it mean when birds fly in a circle? Everyone knows vultures do it when they are circling a dead animal’s carcass but what about other birds?

Here are the 7 usual explanations for this strange behavior and why the symbolism behind it isn’t actually negative in any way. 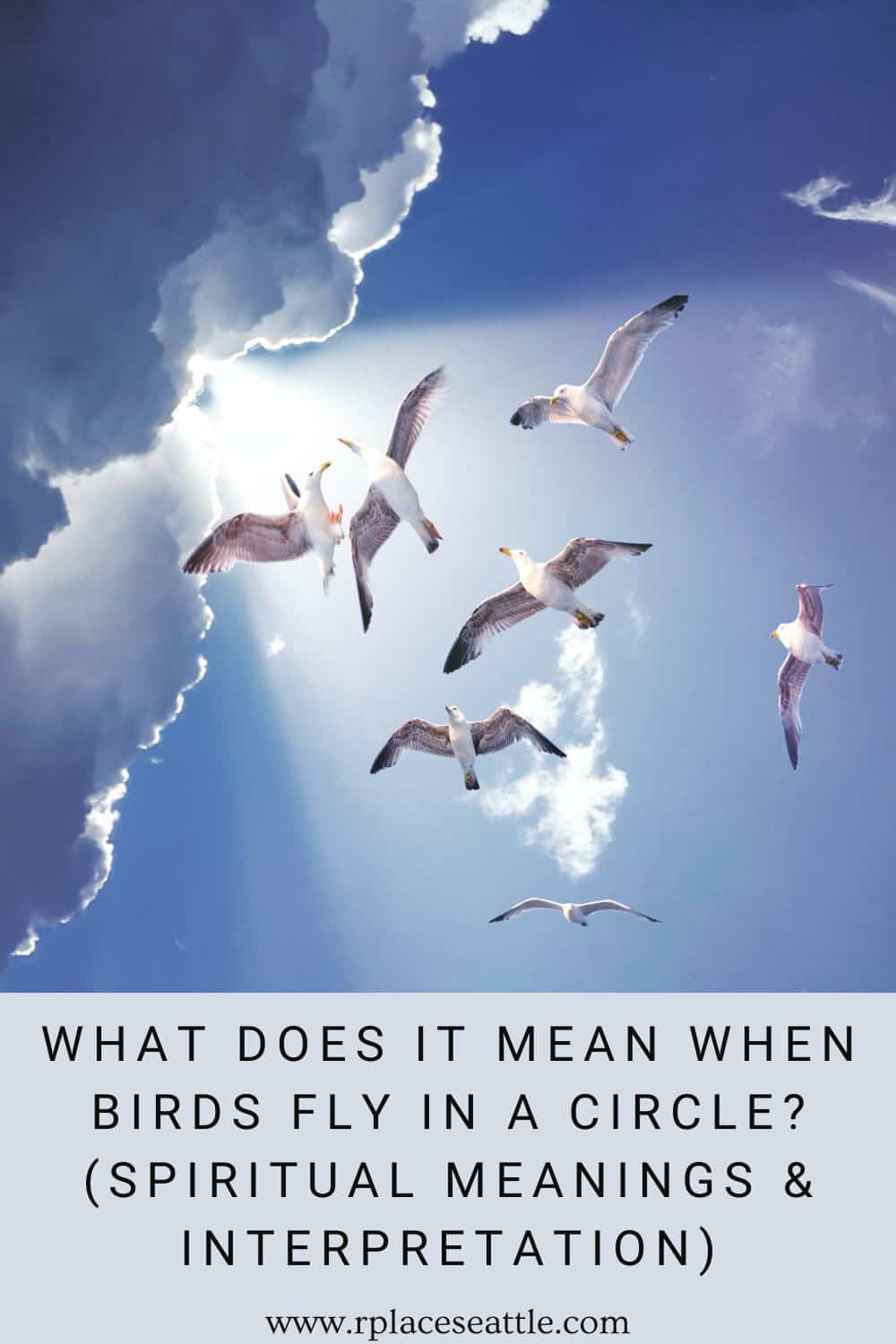 What does it mean when birds fly in a circle?

Just like people walking about, birds flying in a circle often means that they are looking for something. That “something” can be very different depending on the situation, however. It can be anything from food, safe landing space, energy conservation, comrades for a migration flock, or a warm air current to lift them up in the air. Here’s a quick breakdown of each of the 7 main reasons:

1. They are using an updraft to fly higher into the air

Probably the most common reason for birds to fly in circles is actually just to utilize upward air currents of warm air – i.e. updrafts – to climb to a higher altitude. Birds have an excellent sense of such air currents as they are extremely useful for birds to get where they want to go without spending too much energy.

Flapping those wings is difficult after all, especially for large birds – if they didn’t “ride” on updrafts, many birds would have to eat several times more food than they currently do to get enough energy and that’s not really sustainable.

As for the reason why most birds want to get higher – that’s usually to get a more advantageous starting point for a long flight, often for migration. The higher they start, the longer they can glide without having to flap their wings, after all.

2. They are signaling other birds to join their migratory flock

An additional migration-related reason for flying in circles is to signal other birds to join their migratory flock. This is important for birds as the larger the flock is, the better they can ride the migratory air currents without expending energy – that’s because having other birds in front of you reduces air friction, hence why birds migrate in flocks in the first place.

3. They are trying to confuse predators 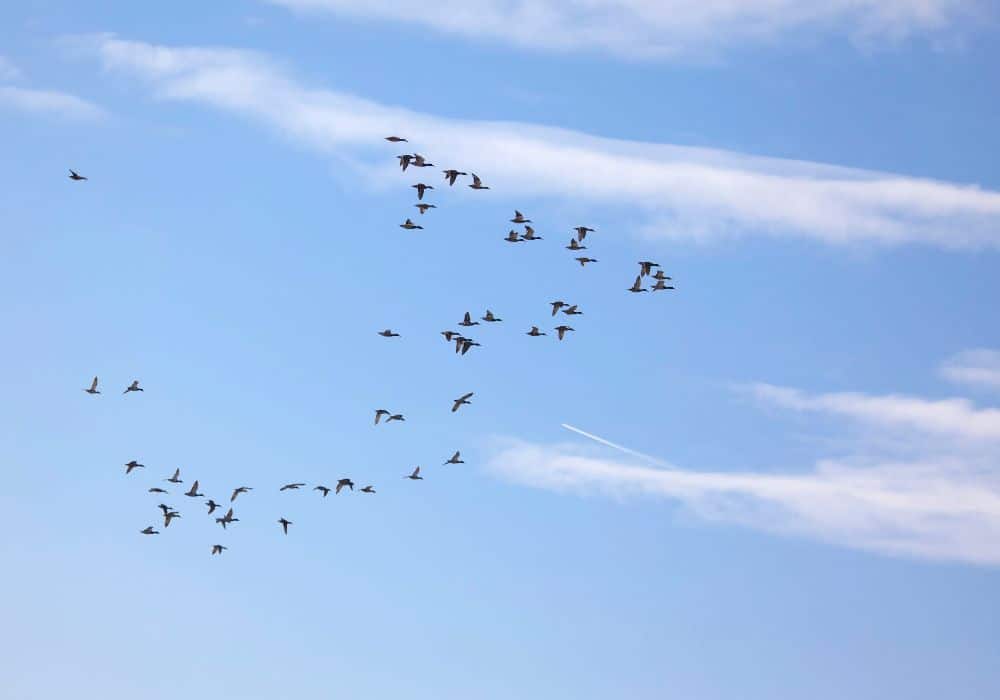 A common reason for smaller birds to fly in large flocks and to do circles and other strange patterns in the air is to confuse larger predators such as hawks and falcons. This behavior is similar to that of schools of small fish in the ocean – it’s a simple strength-in-numbers type of strategy.

4. They are scouting for resources

What most people think of when we talk about birds flying in circles is vultures or birds of prey looking for their next meal. And that’s indeed another common reason for large predatory or scavenger birds to fly in circles too. It may feel and look sinister at first but it’s actually perfectly normal.

5. They are keeping an eye for land predators before flying down

A reason people often don’t mention is that birds will often circle in the air when they look for potential dangers on the ground. That’s why vultures often circle too – they wait for the predators to get away. But non-scavenger birds will also do it when there are people or other animals on the ground the birds are afraid of.

6. They are simply trying to orient themselves before landing 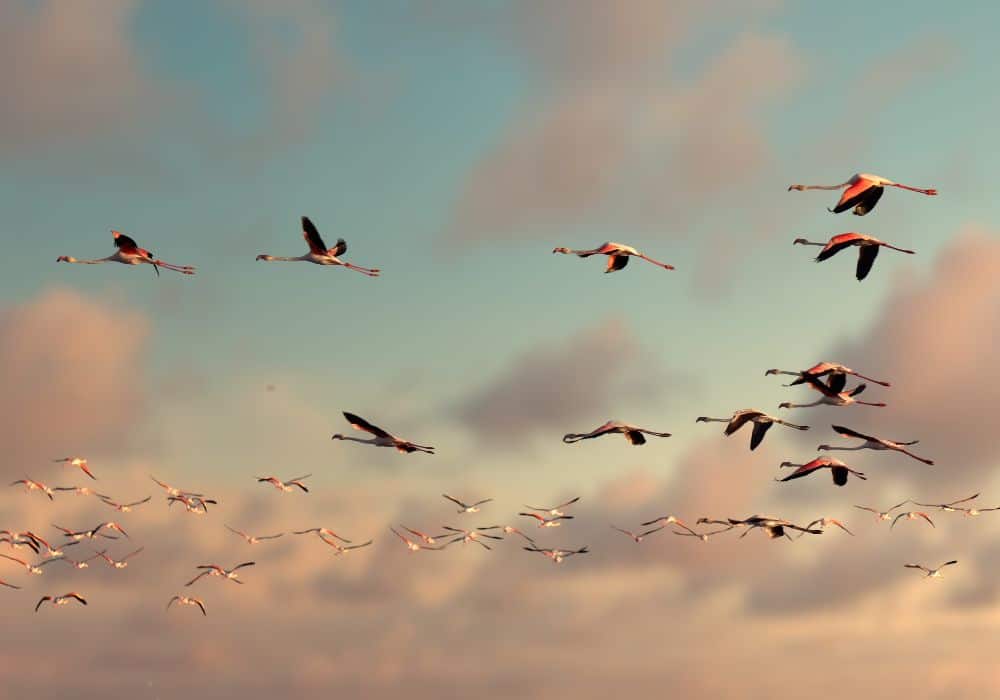 Even if there are no dangers on the ground, birds will often fly for a bit before landing simply because they are trying to get their bearings. Despite their awesome eyesight, birds can get lost sometimes too, and might need to do some circles to figure out where they were supposed to land. This really is no different from us circling around the block, looking for a particular place we were supposed to go to.

7. They are just trying to save energy

Lastly, sometimes birds will simply circle aimlessly in the air because they don’t have anything particular to do and they are looking to conserve energy. There are birds like the common swift that almost never land – so, when they need to save some energy while in the air, doing circles is the way to go.

Why circles and what exactly is an updraft?

All seven behaviors above are quite different yet they are all done in the exact same way – by circling in the air. Why? The answer is simple – because circling is convenient and it saves birds a great amount of energy. It allows them to stay in the air in more or less the same spot without having to flap their wings and expend too much energy.

This is especially true in the case of updrafts. Also called thermals, updrafts are air currents of warm air that allows individual birds or a whole group of birds to reach a higher altitude with ease. This rising air is the main advantage of thermals and it allows birds to get higher in the air and then fly long distances easier and by using less energy. 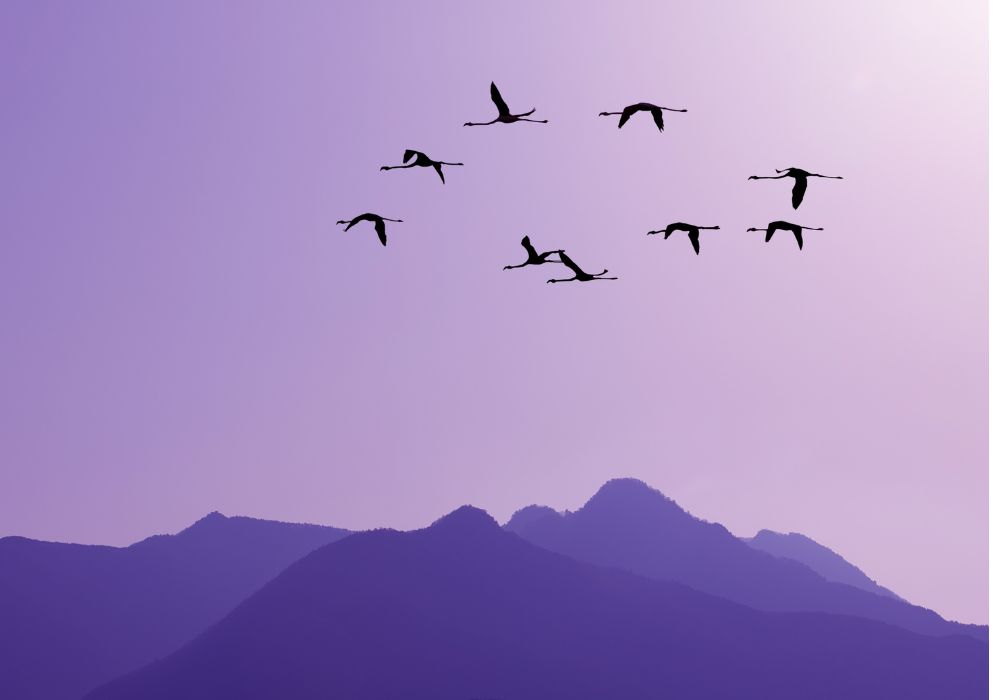 As to why updrafts happen in the first place – usually, they are just warmer air that rises up and pushes the colder air aside. This warm air usually gets that way when the ground beneath it gets extra warm by the sun and then warms the air above it by proxy. Of course, other cases such as fires or man-made heat can also result in updrafts.

So, why do birds always flock near such updrafts? Because the abundance of warmer air is like a natural elevator to them which makes the phenomenon of birds flying in circles both simpler and all the more fascinating at the same time.

Which birds fly in circles and which – don’t?

While virtually every bird on the planet utilizes wind currents when it needs to, some definitely do so much more than others.

For example, any migratory species of birds fly in circles right before migration. This can include many birds such as pelicans, storks, and even crows and vultures. Scavengers like vultures and crows also often fly in circles when they are looking for available food to scavenge on.

Predatory birds such as condors, owls, hawks, falcons, eagles, and others will also sometimes fly in circles far above the ground as they prey on their future meals from above. And then flocks of birds on the other end of the food chain such as doves, and pigeons will also fly in large groups and in circles to confuse the large birds that prey on them. And then, there are starlings and the wonderful dance of murmuration.

As for the birds you’ll rarely if ever see flying in circles – those are usually small and woodland species of birds that neither migrate, fly in flocks, nor prey on others from high above. Such birds are small enough to not need the energy conservation effect offered by thermals and they prefer to hide in the forest when chased by predators.

That being said, given a specific situation, any bird can and will circle the air for the right reason – it’s just too convenient of a flight pattern not to.

What is the spiritual meaning of birds flying in a circle?

With all of the above being said, it’s clear that birds flying in a circle can have varying spiritual meanings. Depending on how you choose to look at it, it could be a good sign indicating wisdom, prosperity, and good fortune, or it can be a good omen for a successful and united future.

Or, you can see it as an omen for bad luck instead of good luck if the sight of vultures circling a carcass freaks you out too much. We don’t really see it that way, however, as even in this latter case, the vultures are helping keep our environment clean and hygienic.

And, in most other cases, bird circling in the same spot is about migration, rather than anything else which is very much in line with their symbolism as heaven’s messengers.

In conclusion – no, birds flying in a circle near you isn’t a bad sign

Birds flying in a circle can seem puzzling at first but it actually is one of the most normal things in nature. We have a lot of myths and misconceptions about it because people even just a few generations before us didn’t have enough scientific understanding to figure out why birds do that – they only knew that sometimes birds circle prey or dead animal carcasses.

Today, however, we know that birds tend to fly in circles for many reasons, each more normal and harmless than the other. So, there is no bad symbolism in that – if anything, it’s one of the many cool things we love about birds.